We connect in new and innovative ways to deliver our message to more people. On the web and on your television, in your mailbox and your inbox, we broadened our reach and opened more lines of communication between the CLPNA and our members, stakeholders and the public.

Print, surveys, television ads, Facebook updates and face to face – the CLPNA reached out to its members and stakeholders through a variety of mediums and initiatives in 2013.

The redesigned CLPNA.com website received nearly 50% more visits in the first two weeks of launch compared to average weekly visits in 2013. Following the June redesign launch, visit duration also increased by 47%, as have page views (32%) and pages per visit (25%). This could be attributed to the new cleaner design with unique landing pages directing viewers to specific content for members, employers, new applicants, IENs, and public. Each page contains links to the most frequently-visited content for each type of visitor and there is opportunity to comment on news posts.

The CLPNA also has specialized websites for the annual conference (www.clpnaconference.com), the Fredrickson-McGregor Education Foundation for LPNs (http://foundation.clpna.com), and the
“It Says a Lot About You” media campaign (www.saysalotaboutyou.com).

CLPNA completed a Public Survey in 2013 with the goal to understand the opinions and awareness of Albertans related to the LPN profession to inform future branding and media campaigns. In summary, of the Albertans surveyed, 75% are aware of different categories of nurses; 79% recognize the LPN designation as a professional nurse; 74% understood LPNs complete a 2 year diploma; 72% recognize LPNs as having appropriate education and training; and 70% believe LPNs demonstrate professional judgment and critical thinking. The survey asked specific questions related to the CLPNA media campaigns and also queried Albertans about their experiences with health care. Those with firsthand experience in the health system stated 67% satisfaction with their overall care and 73% satisfaction with overall nursing care.

Coming Together at Conference 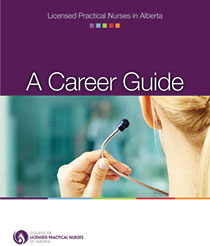 Finding out about the practical nursing profession in Alberta is simpler thanks to the 48-page Career Guide released in March by the CLPNA. Potential students, internationally educated nurses and applicants from other provinces can find information about the profession, the work, the regulations, the province, and the opportunities to be discovered in nursing. Production of the guide was made possible through a grant from Alberta Employment and Immigration, Foreign Qualification Recognition branch. The Career Guide is available electronically at www.clpna.com or in hardcopy by request.

Licensed Practical Nurses were the focus of three one and two minute television ads for CTV Two Alberta’s Career Connectors. These occupational profiles broadcast during primetime during September and October reaching an estimated 980,000 viewers every week, and an additional 1.45 million Canadians outside of Alberta. These videos can be viewed on the CLPNA YouTube site or at www.connectedtoeducation.ca.

The CLPNA ads created with Global Television in fall of 2012 were also aired via Health Unlimited Television Network (HUTV). HUTV is a private network health education and awareness service provided in hospital, clinic, and laboratory waiting rooms throughout Alberta. The CLPNA ads were aired for 4 weeks in June and October 2013 and appeared on about 190 television screens to an estimated 650,000 Albertans in more than 50 Alberta communities.

Over 1300 CLPNA members paused to take our “5 Minute Communications Survey” in October, providing valuable insight into their usage of CLPNA’s website, social media, videos, webinars, and CARE magazine. Results were made available in the winter issue of CARE. Participation with the CLPNA via social media continues to increase. CLPNA is on Facebook (www.facebook. com/clpna), Twitter (www.twitter.com/clpna), YouTube (www.youtube.com/clpna) and LinkedIn.

The printed page retains its value at the CLPNA as well. CARE magazine continues to explore the LPN experience in its many dimensions. This quarterly publication featured stories on rural care in Oyen and Drumheller, hospice care in Red Deer, holistic cultural care in Saddle Lake Cree Nation, and a clinical neurosciences unit in Calgary. CARE has a circulation of 13,000 to LPNs, LPN employers, and stakeholders; and is available online at www.clpna.com/legislation-practice-policy/caremagazine.